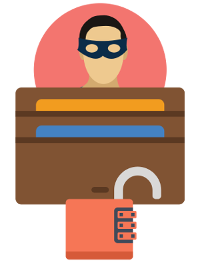 A blockchain sleuth has been guessing Ether private wallet passwords and using a private node to check for known addresses to then empty the associated altcoin wallets. Currently according to Etherscan, the wallet has around 45,000 Ether or roughly $7.3 million dollars. A consulting firm based in the US called ” Independent Security Evaluators ” ( ISE ) published the report on the Ether sleuth titled ” Ether Combing “.

Accidents and mistakes happen and if you’re not knowledgeable, you could create the perfect storm and lose all your funds. Some ether wallets were found to not have a password set, which will result in the emptying of such a wallet. The RPC of Ethereum nodes is not to be exposed, yet when they are, nodes can be compromised. It’s important to stay ” in the know ” and keep updated on how to prevent cryptocurrency scams.

This problem is not just with Ether. It’s a blockchain wide problem, with so many now using technology they aren’t 100% or in many cases 50% aware of altcoin wallet safety precautions. There tends to be an ethical delima says ISE in what to do when coming across unsecured wallets. The IFS says best practice is if any such wallet is found, to leave it be. Doing ANYTHING with an unsecured wallet could lead to criminal charges.

Wallet Security Is Important To Practice

Use wallets that are well-known and trusted among the community. Otherwise you could be setting yourself up for failure on someone’s else’s mistake. However, even that’s not enough sometimes, as they is inherent risk with popular products. Looking at IOTA wallet being compromised by a Oxford developer who stole 10 million euros in March 2019, he was arrested.

Open source doesn’t always mean safe, since code can be hidden in plain sight to those not exercising due diligence. Luckily ISE and other researches will continue to search and sift wallets for issues and raising alarm. Highlighting faulty private keys and other security risks. Hopefully it turns into a collaborated effort among the community. As always, if you need altcoin wallet help, it’s just a click away!